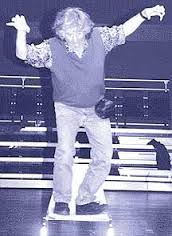 In the late 1980s, Mark Weinberg then a professor in the University of Wisconsin system) and Doug Paterson co-founded the Theatre and Social Change focus group of the Association for Theatre in Higher Education. Intrigued by their reading of Augusto Boal’s Theatre of the Oppressed, they decided to invite Boal to be the keynote speaker for the 1992 annual conference and to give workshops on his techniques.

Boal’s keynote address was breathtaking and transformational for Mark and others at the conference stimulating long conversations about the meaning of theatre, the nature of oppression, Freirean teaching, and the place of TO in the worlds of theatre and progressive politics. Mark continued to take frequent multi-day workshops from Boal until his passing in 2009 and from other like-minded theatre-makers until the present. (Most recently he was fortunate enough to participate in Muktadhara 2022 with Jana Sanskriti in Badu, India.)

He introduced TO in traditional theatre classes and used the techniques to raise questions about oppression and exploitation in a variety of circles. During those early years, he taught TO, gave workshops at schools and conferences in the US, Australia, and Canada, and helped develop and joker Forum Theatre with activist groups.

During those same years, Jenny Wanasek was working in the commercial theatre as an actor and director. While in those fields, she was drawn to community-based theatre making in marginalized communities and with children with physical and emotional challenges. She developed performances about racism with youth in several venues including the 2000 Dreams project, which brought teens and younger children from several of Milwaukee’s segregated neighborhoods to devise a musical about barriers to realizing their dreams. During this time she was also a faculty member at UW-Milwaukee.

In 1999 Jenny participated in TO workshops that Mark offered at UW-M. Mark was invited to develop courses in Participatory Theatre and Applied Theatre (a community service class in which students created Forum Theatre with community partners) for the Theatre Department. Jenny and Mark shared play devising techniques and TO and found a common language to serve communities. Jenny took her first workshop with Boal in 2000. Mark and Jenny married in December of the same year.

In 2001 they were asked by Milwaukee Public Theatre to develop a program about drug addiction that could tour to schools. That first Forum Theatre play was developed with 22 community members, all of whom had experienced tragic losses related to drugs and alcohol. The Center for Applied Theatre was formed later that year to continue to tour that play and develop others. Over the next 10 years CAT reached more than 16,000 students with Forum plays about drugs, bullying, sexual harassment, pressures to have sex, and dropping out of school.

While the performance arm of CAT continued to tour, Jenny and Mark developed workshops and residencies with young people and the organizations that served them. They adapted TO and related techniques to work with activists, faculties, university students, NGOs, service organizations, unions, support groups for LGBTQ teens and runaways, half-way houses for ex-inmates, and other groups.

In addition to work in schools funded by Milwaukee Public Theatre, CAT also became Teaching Artists with Arts at Large and Milwaukee Public Schools. For 18 years they worked to create cultures of respect, responsibility, and empathy and support liberatory pedagogy in and around educational institutions. Their work in schools has included the creation of Forum plays, incorporating theatre techniques into various curricula, and the creation of videos and graphic books exploring the genesis of violent choices and imagining positive transformation. They also created an interactive video exhibition on bullying that ran for three months and gave workshops to visiting school groups.

In 2010 Jenny took a workshop with The Virtues Project and experienced firsthand the transformation that can occur when one uses the language of virtues with others in workshop and educational settings. Virtues such as courage, compassion, assertiveness, gentleness, etc., can be integrated into goal setting and boundary setting to clarify needs, objectives, and aspirations. The techniques of The Virtues Project are powerful tools to help community members and activists themselves to find sustainable ways to stay in the struggle for social change.

CAT has developed a set of workshops and residencies drawing on Theatre of the Oppressed and The Virtues Project designed to serve groups and individuals who want to use the techniques to explore their own power to promote justice and create progressive social change.

During the quarantine, Mark was part of a group of TO practitioners from six countries who met online for over a year to share techniques, try out new ones, and develop ways of using TO online. Mark played a crucial role in a collaboration with Rangbhumi – A Happy Playground in India, ANAMUH – Arts for Dialogue in Greece, Spiel_Raum and Theater der Unterdruckten Wien in Austria which brought Rangbhumi’s play, Raise Your Hand, to an international audience.

Jenny and Mark delivered an online series of workshops designed to improve facilitation of race dialogues for Conner Prairie Museum in Indiana and a workshop for the 2021 international Play, Perform. Learn, Grow (PPLG) conference on using the language of virtues and image making for healing and inspiration in activism.

Jenny has continued her anti-racism work online with Copper-to-Gold and has been facilitating classes for refugee children in the Milwaukee area. Mark has been working as a storytelling coach with Ex Fabula. They have continued using TO with communities exploring a variety of issues - most recently ecoliteracy with Arts at Large.

Jenny and Mark remain active in the Pedagogy and Theatre of the Oppressed (PTO) organization, sharing ideas with TO practitioners around the world. Mark previously served on the board for nine years, edited the PTO Journal from 2018-2021, and has returned to the board. We are looking forward to participating in the next international PTO Conference in June 2023.

For booking or additional information, please contact
the Center for Applied Theatre.

Facebook Twitter
Mark and Jenny are creative, compassionate, flexible, insightful guides and jokers. I have taken several workshops in Theatre of the Oppressed with them, and will continue to do so every chance I get. Their co-jokering is always compassionate, very very fun, and challenging. I always learn from them!
Ellie Friedland Theatre of the Oppressed joker, past president of Pedagogy and Theatre of the Oppressed, and Associate Professor at Wheelock College, Boston
The Center for Applied Theatre brings to any work site an unusual breadth of experience, including much one-on-one work with Augusto Boal himself. They also bring a deep understanding of social and economic justice infused with genuine compassion for all those on the margins of power. Their adaptating of techniques to specific circumstances is very impressive. Few community-based theatre artists bring the range of experience and skill as do Jenny Wanasek and Mark Weinberg. I always recommend them, and I do so with confidence and without reservation.
Doug Paterson, PhD. University of Nebraska-Omaha, Founder of Pedagogy and Theatre of the Oppressed
Center for Applied Theatre is organization that epitomizes the vision of Arts @ Large. They work with school communities to unearth the profound narratives and knowledge that young people inherently hold but may be resistant to unveil. Mark and Jenny have the ability to meet both young people and adults where they are and work as partners to transform the way we see ourselves and our community.
Ryan Hurley Program Manager, Arts @ Large
Previous
Next
Scroll Up

is a teacher and student of history and culture. Her concern is for increasing knowledge and understanding so that we will have justice for all.

EDUCATION
Elementary and high school on the south side of Chicago where she was a National Merit Scholar. The area was and remains a largely African American part of the city due to redlining and racial segregation.
BA Michigan State University and University of Illinois – Urbana/Champaign. Major in Early Childhood education, minor in social studies.
M.Ed. University of Illinois – Urbana/Champaign.

ADDITIONAL TRAINING
Workshops on understanding unconscious and internalized racism and the history of racism in the US.

RELATED WORK EXPERIENCE
Kathleen has co-lead workshops and discussions about racism and how to heal our nation.

JULIAN BOAL is a teacher, researcher, and practitioner of Theatre of the Oppressed. He has facilitated workshops in more than 25 countries and has collaborated on several international festivals of Theatre of the Oppressed: in India with Jana Sanskriti, in Spain with Pa’tothom, in Portugal with Óprima, in Croatia with the Istrian National Theater, in France with GTO-Paris, and in Brazil with CTO-Rio. Some other groups and movements with whom he has worked closely include MST (the Landless Workers Movement) and MSTB (the Roofless Movement of Bahia) in Brazil and La Dignidad In Argentina. In Paris, he was a founding member of the Ambaata collective, which worked alongside migrant workers, and he also worked with GTO-Paris and Féminisme Enjeux. He participated in the design and realization of the exhibition on Augusto Boal at the Centro Cultural Banco do Brazil in 2015 and curated part of the Utopia International festival, held in Maricá, Brazil, in 2016. He collaborated with Sergio de Carvalho as assistant playwright for two recent plays of Companhia do Latão (São Paulo): Those Who Stay (2015) and The Bread and The Stone (2016). He holds a Master’s degree in History from the Sorbonne (Paris IV) and a Ph.D. from the School of Social Work at the Universidade Federal do Rio de Janeiro. Boal is the author of Images of a Popular Theatre (Hucitec, 2000) and co-editor of the DVD & essay booklet Theatre of the Oppressed in Actions (with Kelly Howe and Scot McElvany, Routledge, 2015) and The Routledge Companion to Theatre of the Oppressed (with Kelly Howe and José Soeiro, Routledge, 2019). He is co-founder (with Geo Britto) and pedagogical coordinator of Escola de Teatro Popular (ETP; The School of Popular Theatre, in Rio de Janeiro), a school run by social movements for social movements, where political unity is practiced at the grassroots level through the practice of theatre. He is also a member of the Instituto Augusto Boal in Rio.

Strategist, facilitator, and Consultant for Go Beyond Diversity

Originally from Omaha, Nebraska I moved to New York in 2005. A white and Native trans queer person with disability, I have spent my entire adult life working at the intersections of art and social justice and equity, utilizing Theatre of the Oppressed techniques and working with the queer and trans* movements. I work with organizations, businesses, community groups, faculty and students to strengthen understanding about power, privilege and oppression and to provide stronger tools to make positive change in the world.

In 2000, I started organizing in Omaha as the voter canvassing coordinator against the so-called Defense of Marriage Amendment. Ever since I have been dedicated to developing and supporting change-makers. I have worked for several non-profits including the ACLU, GLSEN, Race Forward: The Center for Racial Justice Innovation and The Forum Project. I also have worked for large and small for-profit businesses in service, finance and retail industries. As a consultant, I’ve worked with many clients to understand the impacts of systemic power, to develop strong critical analysis to help develop tools for doing good work better. I bring experience training advocates and organizers across the country on non-profit management, legislative advocacy, campaign strategies and engagement and most commonly on positive and effective strategies for addressing power, privilege and oppression in their work.

I hold a BA in Theatre with an emphasis in Directing from the University of Nebraska at Omaha and a individualized Master of Arts from Gallatin at New York University, focusing on utilizing creative participation for political and social change with course work in community studies, public policy, non-profit management and campaign strategies. I have studied Theatre of the Oppressed techniques and other creative pedagogy techniques since the late nineties, working with facilitators from around the world, and have trained with TO’s founder Augusto Boal multiple occasions. I was also a Out in Front Leadership Fellow with Stonewall Community Foundation in 2011. I am proud to have served as a Board Member and Board President of Pedagogy and Theatre of the Oppressed from 2011 to 2018.